To share your memory on the wall of Ottis Lawrence, sign in using one of the following options:

Print
Ottis Lee Simmons was born October 11, 1913 in Alton, Florida to the late William and Martha (Peoples) Simmons. She attended Elementary School in O’Brien, Florida. Ottis accepted the Lord into her life at an early age.

She was unite... Read More
Ottis Lee Simmons was born October 11, 1913 in Alton, Florida to the late William and Martha (Peoples) Simmons. She attended Elementary School in O’Brien, Florida. Ottis accepted the Lord into her life at an early age.

She was united in holy matrimony December 3, 1940 to the late Esix Park Lawrence. Ottis relocated to Rochester, New York in 1942.

In 1943, she joined the New Bethel C.M.E. Church under the pastorate of Reverend F.E. Bell. As a member of New Bethel, she sang in the choir under the direction of Mrs. Margaret Lee. She served under many pastors, and at the time of her home-going, she was an active member of the Stewardess Board.

Ottis Lee was a positive person. She was also an encyclopedia for her family and made it a point to keep in touch with family. She enjoyed socializing, dancing, games and traveling, which she did extensively to places like Rio, Jerusalem, Egypt, Israel, Italy, Paris, Germany, as well as several cruises. She loved solving word puzzles and sewing. She was such an accomplished seamstress that she made her own clothes and clothes for her children and grandchildren. Because of her great love for children, she helped with the care and raising of many children, particularly her special granddaughter, the late Sonja Williams. Ottis was also a lover of animals, with special affection for her beloved pet named “Brownie.”

To send flowers to the family or plant a tree in memory of Ottis L. Lawrence, please visit our Heartfelt Sympathies Store.

We encourage you to share your most beloved memories of Ottis here, so that the family and other loved ones can always see it. You can upload cherished photographs, or share your favorite stories, and can even comment on those shared by others.

Posted May 15, 2020 at 06:31am
What an amazing lady, I had the pleasure of knowing and caring for Ms. Lawrence for the past 3 years , she will be greatly missed, RIP Ms Lawrence, Heaven has truly gained an Angel.
Mary Wells (Nurse at Penfield Place)
Comment Share
Share via: 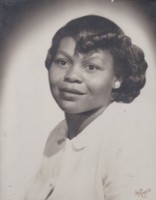