To share your memory on the wall of Ashlei Brumfield - Johnson, sign in using one of the following options:

A receipt has been emailed to the address provided. A receipt may also be printed.

Ashlei was united in marriage to Frederick Johnson on August 31, 2012. They moved together as one, and
their love was not only seen, it was heartfelt. During their years of membership at Triedstone M.B. Church,
they served with distinction as members of the Diaconate, Christian Education Department and in church
administration. Three families were joined as a result of their union: the Annie Lee Johnson family, the
Loveberry’s and the Brumfields. Ashlei would often spearhead events, gathering family from both sides.
She took pride in being able to host family dinners, game nights, and Super Bowl parties at the community
center of the complex where they lived. She made sure there was enough food, and paid close attention
to detail from beginning to end. Ashlei made sure everything went as planned, and Frederick was right by
her side all the way. It was important to her that family came together, and that you knew who your family
was, as well as where the connections were. A proud Brumfield, she wanted it known who and whose she
was. Ashlei was also a very candid individual. If you were special to her, you knew it. It was not uncommon
for those individuals to receive a surprise letter, a package on their doorstep, or a personalized gift or
bookmark. She cherished her aunts and wanted to make certain they knew how much she loved them.
Hers was the true heart of a servant, so serving and giving were her ways of showing her love and
appreciation to others. The act of giving was her true love language.

Although Ashlei developed numerous relationships in the brief time God loaned her to us, her greatest
relationship was the one she developed with her Lord Jesus Christ. Her one request until the time of her
passing was that her soul would be right with God. In the months prior to her death, she began to release
past hurts, letting them go in an effort to free herself in preparation of meeting her Creator. On two special
occasions, a few of her special aunts visited her home to pray with her for healing and restoration. Ashlei
welcomed them with a grateful heart and listened attentively to their advice. She immediately gained
strength and a renewed peace, love and joy, just by their presence, alone. She had a feeling of assurance
that the Lord was and would be with her. The last event, her 37th birthday, was shared with her two brothers.
Ashlei had the whole weekend planned out. There was a birthday dinner and a trip to the Strong National
Museum of Play. God gave her the strength to accomplish it all.

To send flowers to the family or plant a tree in memory of Ashlei Monet Brumfield - Johnson, please visit our Heartfelt Sympathies Store.

We have provided a digital copy (PDF) of the Memorial Program that we supply at the time of the service. To Download this file please click the filename below.

We encourage you to share your most beloved memories of Ashlei here, so that the family and other loved ones can always see it. You can upload cherished photographs, or share your favorite stories, and can even comment on those shared by others.

Flowers were purchased for the family of Ashlei Brumfield - Johnson. Send Flowers 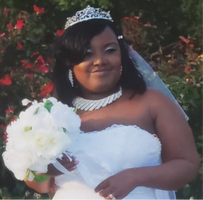